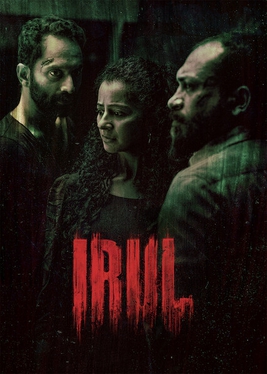 Alex Parayil, a writer and businessman, and his girlfriend Archana Pillai plan to take a weekend off with no cell phones, where Alex promises Archana a surprise. En route, their car breaks down in the rain, and the couple attempt to take shelter at a nearby house. At the house, they are taken in by the owner of the house, who tells them the telephone line is not working on account of the storm and permits them to stay the night. The trio gets to talking during which the eccentric house owner criticizes Alex’s book, ‘‘Irul’’, based on a real-life serial killer, as being inaccurate and heavily imaginative, rather than relying on actual facts and information.

Mid-conversation, the power supply in the house gets cut, and Alex and the owner attempt to locate the main switch of the electricity in the basement. Suddenly, a gunshot is heard, and when Archana follows the sound, she sees Alex dragging the unconscious house owner back to the living room and tying him up, accusing the latter of being the serial killer upon whom Alex’s book was based. The owner wakes up and denies this, saying he is a thief who broke in and disconnected the phone line, but Alex refuses to allow Archana to make any call to the police, revealing that the house is his. Alex then reveals how his plan was to bring Archana there and propose to her, but was surprised to find a stranger in his house, but decided to play along with out of curiosity. They both provide contradicting stories of what happened in the basement, saying there was the corpse of a girl in there who was killed in the same manner as the serial killings, as Alex and Unni blame the murders on each other. Archana begins to question Alex’s innocence, as Unni reveals he found multiple rings in the house opposed to the one ring that Alex showed, a gun that belonged to Alex, and the fact that Alex bought a cellphone when he prohibited Archana from doing so.

Eventually, the three lands in the basement to check the corpse, where Alex begins to assault Unni, while Archana attempts to fire at Alex. Alex, on Unni’s provocation, decides to kill and bury the latter, as Archana concludes that Alex is the killer, and shoots him in the stomach. As Alex begins to succumb to the wound and asks Archana to leave the house, Unni creeps from behind her and gets her to pull the trigger, revealing himself as the killer. The following day, news of the discovery of the three corpses of Alex, Archana, and the girl identified as Vani Balan, is telecast with the report that the killer is still at large.