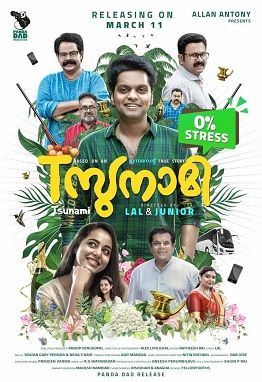 Tsunami is a 2021 Indian Malayalam-language sex comedy film directed by Lal and Lal Jr. and written by Lal. The film stars Balu Varghese, Innocent, Mukesh, Suresh Krishna, Aju Varghese, and Aaradya Ann. The film follows Bobby, a young man who ends up in struggling situation with a women, which is followed by their marriage

Bobby is a young man who goes to a seminary in Goa to become a priest, despite his family opposes that. But during his journey he ends up going to the bathroom while the bus stops for a break and by chance happen to enter a ladies toilet. Anna, a girl comes and opens the door when he had taken off his pants leaving the girl and Bobby both scared. Her relatives take her from there seeing her scared and shouting while her mother returns to the bathroom to see Bobby hiding his face and running from there. She pursue him to beat him up but he outrun her. Feeling sad he ends up not going to seminary and return home. Bobby decided to marry Anna. Then the family decides to get him married according to their wishes. But the effect of the events of that journey do not leave him and he ends up in trouble after marriage. 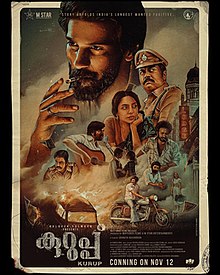