Minnal Murali (transl. Lightning Murali) is a 2021 Indian Malayalam-language superhero film directed by Basil Joseph and produced by Sophia Paul, under the banner of Weekend Blockbusters. The script is written by Arun Anirudhan and Justin Mathew. The film stars Tovino Thomas in a dual role along with Guru Somasundaram. It follows the life of Jaison, a young tailor, who gains superpowers after being struck by lightning and transforms into a superhero.

The film was formally announced in January 2019, but due to the extensive pre-production works, the film’s principal photography took place during December 2019. Though shooting got disrupted twice following the two waves of the COVID-19 pandemic and the vandalism of a church set by right-wing groups, the makers managed to complete the shoot within July 2021. The film was predominantly shot in Kerala, with few sequences being shot at Hassan in Karnataka. The music of the film was composed by Shaan Rahman and Sushin Shyam, with Shyam also composing the background score, whereas cinematography of the film was handled by Sameer Thahir and editing done by Livingston Mathew.

Jaison, a tailor from the village of Kurukkanmoola, is dating Bincy, the daughter of S.I. Saajan. Jaison’s dream is to go to the United States and become a tailor there. Saajan forbids Jaison to date Bincy and tells him that Bincy is already engaged to Aneesh. Aneesh’s ex girlfriend “Bruce Lee” Biji is also angry that Aneesh had broken up with her. Meanwhile, Shibu is a social outcast who works in a teashop. Shibu is in love with Usha, the sister of Daasan who works in the tailor shop where Jaison works in. Usha has a daughter, who needs an urgent medical operation but Usha does not have the money to pay for the operation. One day, both Jaison and Shibu get hit by the same lightning on Christmas Eve. Jaison is taken to the hospital but surprisingly, he does not have any physical problem.

In the following days, Jaison and Shibu show signs of supernatural powers. Jaison’s nephew, Josemon, comes to the conclusion that Jaison gained superpowers after being hit by the lightning. One day, Jaison’s brother-in-law Constable Siby Pothan gets into a fight with his wife and hits her. Enraged by this, Jaison pushes Pothan and the latter falls into a well and everyone present is shocked by his strength. Usha comes to Shibu’s teashop where the owner makes a move on Usha. Shibu is enraged and almost kills him with his new powers. Meanwhile, Jaison’s plans to go to the United States come to an unexpected halt after his passport verification doesn’t go through. Jaison goes to the police station with his father Varkey where Saajan tells him that he is the one who canceled the passport. Saajan also reveals that Varkey is not Jaison’s real father. Jaison’s real father is Martin Rangakala, a theatre artist. In a flashback, it is shown that a young Jaison and Martin went to a village play which catches on fire. Jaison survived but Martin didn’t. Varkey saw the young Jaison and felt pity for him, so he took him to his house and raised him as his own son.

In the present, Jaison is heartbroken after the revelation. Varkey tells Jaison that he didn’t reveal the truth earlier as he feared that Jaison would abandon him. Jaison realizes that Saajan had hit Varkey. Jaison is enraged and with the help of Josemon, makes a costume for himself and goes to Josemon’s school’s anniversary where many policeman are present including Saajan and Pothan. Jaison, wearing the costume, thrashes the policemen. Saajan asks Jaison to remove his mask and reveal his identity but Jaison doesn’t. Jaison tells Saajan that his name is ‘Minnal Murali’, the character that Martin played in his last play. Meanwhile, Usha’s daughter faints and she takes her to the hospital. The doctor tells her that they need to start the operation on her now or else she might die. Shibu arrives and tells the doctor that he will pay for the operation. Shibu also wears a mask and robs a bank while pinning this incident on ‘Minnal Murali’. When Shibu gives the money to the hospital, the doctor tells that Daasan had already paid for it. Meanwhile, Pothan finds out that Jaison is ‘Minnal Murali’ but Saajan does not believe him. Jaison had been saving money and kept it in his tailor shop, but finds it gone the same day. Jaison realizes that Daasan had stolen the money for the operation. Jaison argues with Daasan and gives him a deadline to give him the money back before that evening. Meanwhile, Usha slowly falls in love with Shibu but Daasan rejects him. Jaison realizes his mistake and goes to Daasan to apologize. Shibu comes to Jaison’s store and kills Daasan as he is the stumbling block between his and Usha’s relationship. Shibu also burns down their store and once again blames this on ‘Minnal Murali’.

Jaison reveals to Biji that he is ‘Minnal Murali’. Biji and Josemon decide to help Jaison prove to the villagers that he is not the one who robbed the bank and killed Daasan while also finding the imposter. The police and Jaison view footage of the store, the night Daasan died, at the police station to see the identity of ‘Minnal Murali’ but the electricity goes out the exact moment they are about to find Shibu. Shibu, wearing a mask, ambushes the police station in an attempt to destroy the CD, the only evidence to show that he is the impersonator, but Jaison as ‘Minnal Murali’ attacks him and steals the CD. Jaison and Shibu take their fight to a bus, where Shibu bests Jaison due to him having Psychokinesis, which Jaison does not have. Shibu destroys the CD and escapes. However, in the altercation, the bus driver hits his head and dies, which leads to the bus dangling from a cliff but Jaison saves the bus, which gain’s him a few villagers respect. Jaison and Shibu start investigating and they find out each other’s identity. Saajan and the police force arrives to arrest Shibu as they found out that Shibu is the impersonator but Shibu scares them away. Pothan finds a picture with ‘Minnal Murali’ in it and shows it to Saajan. Saajan believes Pothan’s findings and arrests Jaison. Usha comes to Shibu’s house and realizes Shibu’s love for her and reciprocates it. Shibu sees a mob outside his home and tries to stop them. But, unknown to Shibu, his house slowly catches on fire. A firecracker catches on fire, due to which his house explodes, killing Usha and her daughter and injuring Shibu. A now psychotic Shibu, goes to a Church where the villagers are and kills many people while trapping many others, including Josemon, and plans to burn them alive for revenge. The police is alerted about the situation and Saajan frees Jaison as he realizes that he is the only one who can kill Shibu. Jaison wears a new suit, goes to the church and confronts Shibu. Jaison puts up a brave fight but is ultimately badly beaten by Shibu. Jaison remembers Martin and is motivated, thereby activating his Psychokinesis. Jaison and Shibu battle one last time which ends with Jaison stabbing Shibu to death. Jaison finally gets appreciation from the villagers while Biji puts out the fire. The film ends with Jaison telling the audience that many more villains will come in the future but ‘Minnal Murali’ will be there to protect the villagers. 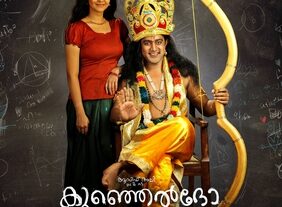