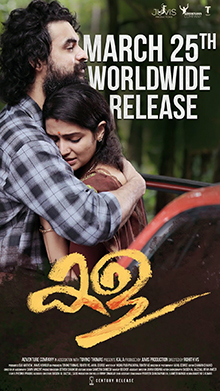 Kala: The Unwanted (കള, lit. ’Weed’) is a 2021 Indian Malayalam-languagepsychologicalaction thriller film, directed by Rohith V. S. and written by Yadhu Pushpakaran and Rohith V. S. It stars Tovino Thomas and Sumesh Moor in the lead roles and features Lal Paul and Divya Pillai in supporting roles. Chaman Chakko is the editor of the film while Akhil George handles the cinematography. Dawn Vincent composes the background score and did the audiography.

Shaji is a headstrong person who is undereducated, and has a jenmi attitude of being above others. He does many businesses which ends up being failures. His family leads a simple life and are landowners of agrarian fields. His father, Raveendran has a low opinion about him. Shaji arranges some people through a person who does work for his father to steal some peppercorn‘s stored in the house by his father for covering some of his debt. One of the workers happens to be a person whom he had harmed before by killing his dog. He came back for revenge. Shaji does not care about it and tries to handle him in his own way but things get out of hand. The hustle turns into a bloody turn of events that flips an animalistic side of him and his attacker. In the end, the attacker successfully makes Shaji submit and understand the fear of being attacked, then takes Shaji’s beloved Cane Corso dog as his own. It challenges the viewer to think and reflect on what is good and what is evil.