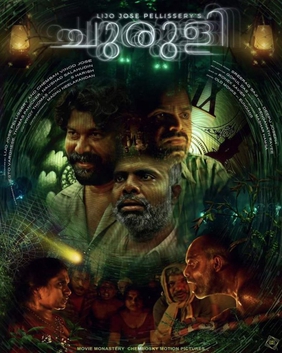 Churuli (Malayalam: ചുരുളി; English: Labyrinth) is a 2021 Indian Malayalam-language mysteryhorror film directed and co-produced by Lijo Jose Pellissery and written by S. Hareesh, starring Vinay Forrt, Chemban Vinod Jose and Jaffar Idukki in key roles.[1][2] The film was produced by Lijo Jose Pellissery and Chemban Vinod Jose under the banner of Movie Monastery and Chembosky Motion Pictures, with Jesto Varghese, O Thomas Panicker and Naushad Salahudin as co-producers.[3][4] Churuli tells the story of two undercover police officers who search for a wanted criminal known as Mayiladumparambil Joy. However, they find themselves stuck in the village of Churuli as eerie mysteries unfold. The original story and characters are based on a short story from the book Kaligaminarile Kuttavalikal written by Vinoy Thomas.

The movie begins with a prologue story of a priest (Thirumeni) who goes to a forest to capture an entity (Perumadan) that misleads people when they get lost. To capture it, he searches everywhere until he comes across a beautiful and mysterious forest. But all the animals, trees and plants wink at the monk (Thirumeni) as if they know him. In his travels, he comes across a ball, which is an anteater (Eenampechi). He puts it in his basket and carries it on his head to give to his children to play. After walking for a while, the anteater speaks, and the amused monk listens to it. After losing his way, the anteater offers to lead him on the correct path. He listens to the anteater and it is said that he is still wandering. He fails to realize that the anteater on his head is the real Perumadan/Madan (Entity).

Two policemen go undercover to a forest to arrest a man called Mayiladumparambil Joy, under the pretext of digging pits for rubber trees for Thankan, the owner. They are under false names, Shajivan and Anthony. The duo boards a jeep heading to their desintation, Churuli. They drive through difficult terrain while Anthony attempts small talk with the rest of the passengers. They cross a bridge with great difficulty, at which point the driver and passengers abruptly change their pleasant personalities to being rude towards the duo, shocking them. After the silent jeep trip, the policemen reach a bar where all the people live under one roof, drinking and merry. While Anthony, the superior of the duo, is quick to adapt to their unusual environment and the people, Shajivan is greatly unsettled. He struggles to sleep, dreaming of strange lights in the sky and twins wearing unusual lights on their heads as they walk past him, accompanied by spirals. He wants to apprehend Joy as soon as possible so they can leave Churuli. However, Anthony has no trouble sleeping, and he takes his time to investigate the case so they don’t arouse suspicion. One day as Shajivan treks, he meets an old lady who remarks familiarity after he says that he had come to dig pits. The old lady quickly closes the distance and starts chasing him with an axe. Scared, he requests Anthony to bring a big battalion and arrest them all, to which the latter dismisses and jokes about. After the makeshift the bar into a church for a baptism, Anthony joins a local man for a hunt. When they don’t reach even after three days, Shajivan goes for a trek and comes across the house of a prominent member of the village. Staring into the house, he is startled by strange cogs and gears accompanied by lights. Anthony and the local man fail to finish the hunt, for which the man blames and berates Anthony.

One day, a Kodagu man suspects foul play after talking to both the policemen. The police duo, locals, and the Kodagu man visit a local mela where he and Shajivan play slap boxing, in which both of them continue slapping each other until one person forfeits. As the game goes on, Shajivan encounters strange visions with each slap. Shajivan is trashed and humiliated. That night, the Kodagu man is found dead at a riverbank. Anthony wakes up in the middle of the night to find Shajivan missing. The following morning, Anthony asks where Shajivan was the previous night, to which Shajivan says that he was there the entire time, and that Anthony was only dreaming.

One night, the local man and police duo head out for another hunt, where they hear strange voices. Anthony asks a confident Shajivan how he knew the forest so well, to which the latter replies that all forests are the same. After hearing strange voices, they spot two creatures similar to what Shajivan saw in his dreams. The alien-like creatures startle them with a strange sound, causing a terrified Shajivan to fire. The same spiral appears behind them, this time glowing. The bullet hits an animal, who falls writhing in pain. After the hunt, the local man deserts them in the middle of the forest. After wandering the whole night lost, Anthony injured his back. They reach the village and visit a local woman who lives with a boy, whom the bar owner confidently declares can heal any injury. She massages Anthony the whole night and Anthony hallucinates spirals and strange rituals involving the people of Churuli. The following morning, Anthony remarks that his back is now better than before, with him flirtatiously thanking the woman. As they leave, the woman finds that the boy is depressed and berates Shajivan for his heinous deed. Anthony reprimands him that he would have been booked under child abuse had he acted such a way in an urban setting, but got settled for thousand rupees. Shajivan is furious, responding that he never did anything.

Thankan arrives at his estate and is confused when the locals say about the duo as he hadn’t recruited anyone to work on his farm. The locals question the duo about their whereabouts while they fumble to answer. Realizing foul play as the duo returns to the bar, the locals hatch various plans to kill them, including burning them alive and chopping them up, while surrounding a terrified Anthony and Shajivan. Having no choice and their cover blown, Shajivan fires a shot in the air, revealing they are police as the locals panic. They question Thankan who they initially thought was Joy, which he refuses, but says that Joy resides in his home. The two policemen follow Thankan while the locals loosely follow behind. Arriving at the house, they find Joy paralyzed while Thankan and his wife plead mercy for a disabled man. Shajivan confidently declares that Joy will be tried in court tomorrow, but his tone quickly shifts as she and Thankan taunt them, laughing at their plan, as the locals arrive. Frustrated and upset, Shajivan fires at the crowd, with them showing no reaction to the bullet wounds inflicted, further laughing the situation off. Joy calls the bar owner nearby and says that he surrenders to the policemen, and they can take him away.

The police duo takes Joy away in the Jeep after Joy pacifies the locals. Joy now starts narrating a story of a policeman, much to Anthony’s irritation: One day, a policeman comes undercover to nab Joy. Though the locals know of his identity, they act dumb to see how far he would go. Further, they exclaim that it is fun to watch the same story unfold over and over. Meanwhile, the police duo gets lost in the woods, which are in the same shape as the spiral. They only remember crossing a delicate wooden bridge. Joy offers to guide them and continues his story: The policeman settles in the village, drinking, eating to his content, and making the village his new home. He goes to an extent that he forgets being police. One day, as the villagers question who he is, the policeman recalls his mission of capturing Joy. He threatens the villagers with a gun, to which the villagers laugh.

Meanwhile, the police duo reaches a dead end, which is revealed to be a spiral deep in the forest. The story is interrupted as Joy miraculously cures himself of paralysis. Strange lights float past above them, towards the moon in front. A strangely calm Anthony looks towards Shajivan, who has inexplicably swapped places with the culprit. Shajivan and Anthony, now completely under a strange influence, are overjoyed as the moon grows larger, pulsing. The jeep is lifted off the ground as it is destroyed in the field, with the trio gleefully floating towards the moon, along with the jeep.