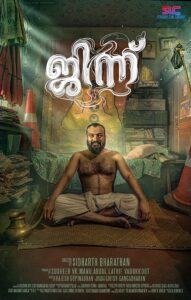 Djinn is a 2023 Indian Malayalam-language fantasy drama film directed by Sidharth Bharathan and produced by Sudheer VK and Manu Valiyaveettil under the banner Straightline Cinemas . The film stars Soubin Shahir in the title role, along with Sharaf U Dheen, Shine Tom Chacko and Santhy Balachandran.

The screenplay and dialogue are written by Rajesh Gopinadhan, who had penned Dulquer Salmaan’s Kali. The music is composed by Prashant Pillai, while Girish Gangadharan has been roped in as the cinematographer and Deepu Joseph has done the editing.