Story plot of malayalam movie One

The tale depicts the politics and governance ideologies and duties of an ideal Chief Minister. Kadakkal Chandran (Mammootty) is the Chief Minister of Kerala and he undergoes a transformation and tries to do good to the populace by bringing Right to Recall (India) tool against corrupt ministers. Will he be able to politically, morally, and sensitively deal with the “plaguing accountability issue” within the existing circumstances becomes the plot.

Affected by the high handedness of police protecting the CM and the challenges faced by commoners when people of power are traveling, Sanal posts an angry anonymous Facebook post lamenting the situation, which goes viral. Opposition parties make this, into a major political issue leading up to a general strike. There is a serious hunt for Sanal by the government and police. The local MLA and attorney are afraid to take up his case. He is apprehended as he tries to flee to Bengaluru. Later the CM declares that he wanted to meet Sanal in person. Though scared, he goes to the official residence of the Chief Minister.On meeting him, Sanal understands that the CM is a good leader and a wonderful human being after the CM reveals the truth behind Sanal’s Facebook post. After an initial friction, Sanal gets more close to the CM . The CM gives him an appointment and his life takes a new turn.

Trailer of malayalam film song One 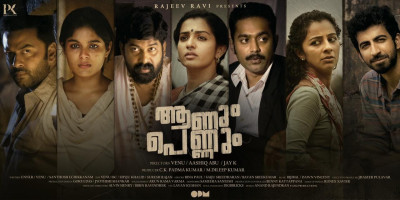